Commander J (my most ardent and loyal supporter, guinea pig and partner) would like me tell her more stories. She suffers my lack of verbal interaction with a variety of responses from mild irritation to less mild irritation (censored here). Fortunately, providing daily sustenance and gastronomic variety keeps her from taking more drastic actions. 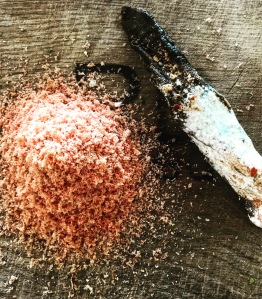 Butabushi – a pork version of katsuobushi

One of the current reasons for my distressing lack of verbal stories is my obsession with Koji. Koji is a fungus (yep, you read correctly) that grows on protein, carbohydrate and fat. It requires some warmth and humidity to propagate well and its growth produces enzymes that break down the macromolecules into simple ones. That about the extent of my scientific vocabulary.

You’ve all eaten koji at some point in your life. The enzymes are used to make soy sauce, miso paste and sake wine. Its also used to make katsubushi (dried bonito flakes) which is used to flavour dashi stock and provides the basis for many japanese recipes. Most ramen stock is made with dashi as a base to which other ingredients are added.

In more recent times, koji has been added to cured meats during the drying stages and the results are spectacular. By breaking down the macromolecules in simple ones such as amino acids glucose and dextrin, the exterior of the protein has more sugars resulting in more caramelisation during cooking. The process also results in a nutty aroma and enhancement of the products flavour. Another interesting fact is that the curing time is reduced significantly due to the enzymatic action.

We’ve been experimenting with a variety of product for the last six months and it has been a lot of fun and very interesting – more for me than Commander J, but she has tasted some delicious things this year. We sell a variety of items depending on whats in stock at the Oranjezight Farm Market at Granger Bay and the Olive Branch Deli in Kloof Street.

Thats my story for today 🙂

I am a passionate foodie and have turned my hobby into my business. We make beautiful, delicious cured meats from the finest raw materials.
View all posts by richardbosman →
This entry was posted in Welcome. Bookmark the permalink.