Posted on April 4, 2018 by richardbosman

The 31st of March dawned in a manner similar to most other spectacular mornings in Cape Town. The sun crept up over the mountains sending out shards of light that bounced off the high rise buildings in the CBD. There were a few gusts of wind but not enough to make the roof play its irritating ratatatat. I’d already been up for hours checking my laces, sticking plasters over my nipples and trying to pin my number on straight. It’s 2018 FFS and we still use safety pins to attach running numbers to a t-shirt (I won’t even begin to describe the registration process apart from the fact the the brother and I managed to catch up on 2 years of news in real time). Luckily Commander J was asleep and did not notice my skew departure as I crept from the house.

First big mistake was not booking the Uber to get to the start of the race. The initial enquiry with Uber informed me that the driver was 25 minutes away and nowhere near town. After driving to Rondebosch, the second Uber driver accepted the fare and then turned his phone off and failed to respond in any way. The ever reliable Doctor Y saved the day and dropped the brother and I off a couple of kilometres from the start. Once sandwiched in our starting lane we waited patiently for the big start. Two of my safety pins had come loose by now during our eventful journey and the brother tried to straighten my number at the back with a  plaster which about as successful as an American trade tariff on Chinese goods.

And then we were off! As Chariots of Fire blared over the PA system we commenced the great shuffle. Three minutes and forty nine seconds later we crossed the start line, valiantly weaving and jiving like a Craven Week rugby centre, trying to avoid running into the 15998 runners in front of us. The brother had a spring in his step not seen since the rand was below ten to the dollar and I found myself having to run just to keep up. Clearly the craft lager carbo loading regime followed in Australia has some merit and should be explored further. The first challenge – Wynberg Hill came and went without a falter and suddenly we were cruising down hill and coasting along to Kendall Road where the second born daughter waited excitedly. There can be no truer display of love than a teenager out of bed at 06:30 to support her dotty old dad.

The kilometres slipped by and we managed to pass quite a few of the runners in front of us who had ignored their carbo loading regime and clearly had over trained for the event. We next turned into Southern Cross Drive and this was the part that I had been anxiously awaiting. For those who have never been to Perth – It’s flat. Like the Earth. Or at least like the Seapoint promenade. The brother had not run up a hill during his training and here was a three kilometre monster up ahead. His charge up the hill could have matched the Light Brigade but with far more spectacular results.  Never faltering and with true grit, we pushed up that hill, until finally we turned at the top into the final stretch. With two thirds done the rest was a formality and while the conversation had shrunk to monosyllabic prehistoric grunting, we managed to run all the way until the end.

Months of planning, preparing and training (in my case) was over in under two and a half hours. Now to find Commander J and where the car was parked – Carumba! We had a great time and completing something like that with a sibling who lives so far away was really special. Thank you to all the kind people who donated to the Cape Kidney Foundation. We managed to raise over R4000 which will no doubt be put to good use. Thank you also to the marshalls and Capetonians who came out in their droves to support the runners. It made all the difference. 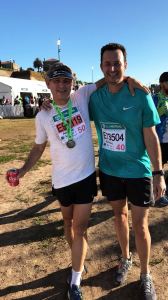 I’m not actually holding him up, he’s just short.

I am a passionate foodie and have turned my hobby into my business. We make beautiful, delicious cured meats from the finest raw materials.
View all posts by richardbosman →
This entry was posted in Welcome. Bookmark the permalink.

2 Responses to Thank You